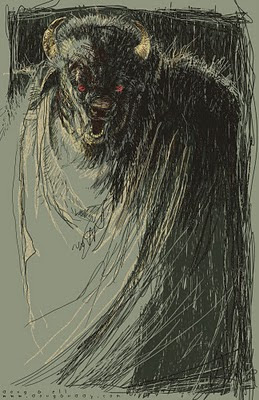 A friend of mine asked a favor, to work up a character for their men's roller derby team; The Cow-town Butchers. They were looking for a Minotaur, or an angry bull character, and asked for something in my drawing style. While it doesn't hit the 'roller-derby' answer at all, the character is interesting I believe.
Posted by dugbuddy at 9:27 AM 2 comments: 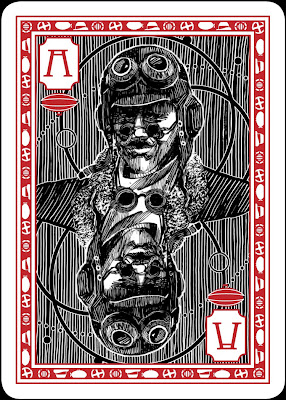 Version 1 started to rub me the wrong way. He looked to villainous. So, since it's my game, I redid it. I am more satisfied with this option. Yes, HE is the Ace of Dirigibles. Done... I think.
Posted by dugbuddy at 10:38 PM No comments:

The Ace of Dirigibles 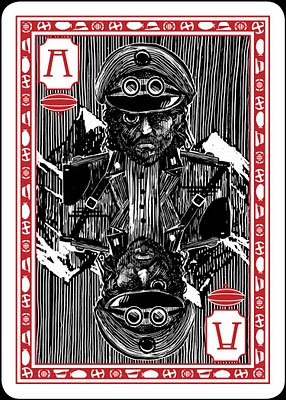 The Ace of Dirigibles is a dog-eared Commander of battles across space and time, witnessing the rise and fall of so many, for so long, yet he refuses to give in to what he truly believes to be wrong. The Ace of Dirigibles has found a loyal House to follow, and a family to call home. For this he will devote and give all that he is.
Posted by dugbuddy at 8:29 PM 10 comments: 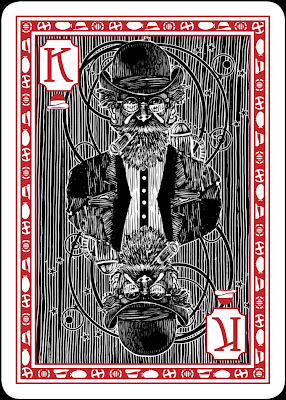 The King of Derbies is one who demands as much from his entire house as he does from himself. He expects victory over all he pursues and expects the same effort in all who follow him. This does not mean that defeat may not happen someday; it is just that it has not happened… ever. The King has a charisma, an ability to reach deep to a core of the individual where the pure self resides, that which is only the defiant independent and is able to touch it, to connect to it, and do speak directly to it. During this link, ideas, concepts, solutions, whys all become known.

Posted by dugbuddy at 4:42 PM No comments: 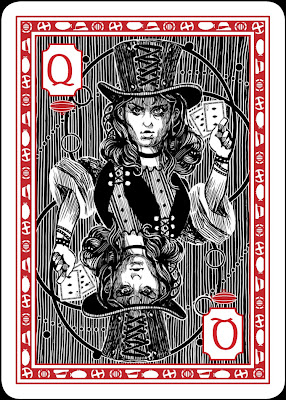 The Queen of Dirigibles is the embodiment of what could be… what might be. Ever reaching forward towards the perceived destiny of the House and herself, she sees the challenges of existence merely as obstacles in the way of the next clue on The Path. At certain times this philosophy can be a driving force of power that when spread to the masses, is difficult to match. If there are too many unknowns however, those may be overlooked for the call of The Path may be so strong as to shadow over pitfalls and warning signs, thus causing casualties, or catastrophy. 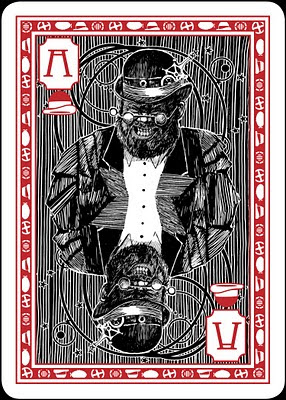 The Ace of Derbies has found his true calling, being the leader of battle this House. For it is this that he excels in, lives for, and is when he is complete. It is here where he knows he can finally release all that is inside without holding back. Victory is what is at stake, and must be claimed for the House of Derby. Being the Battle Lord is not what the Ace of Derbies does, it is what the Ace of Derbies is, it is all that he is. Without the fight, without the foe to conquer, he is lost.
Posted by dugbuddy at 3:30 PM No comments: 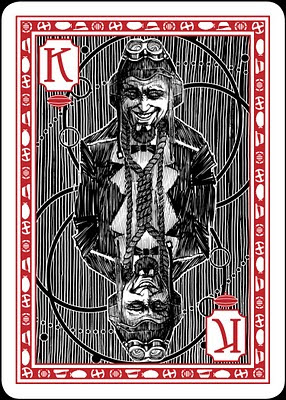 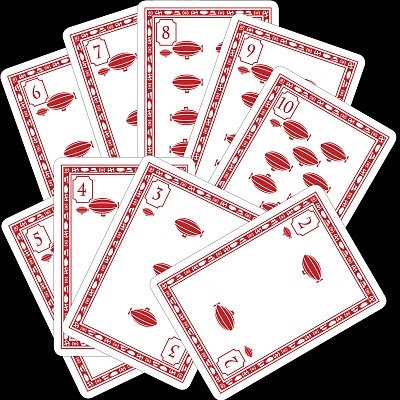 The King of Dirigibles (also the suicide King of this deck: normally the suicide king is depicted with a knife behind his head. Being the King of Dirigibles, knives would not be very welcome, but tie-down ropes are of abundance.) This King is one who seeks out high adventure, and sees his role as leading by example on living life to the fullest. He is not afraid to get his hands dirty by shirking responsibilities when duties become risky, or difficult. In fact, he almost thrives upon it.

Posted by dugbuddy at 5:22 PM No comments:

The Jack of Derbies 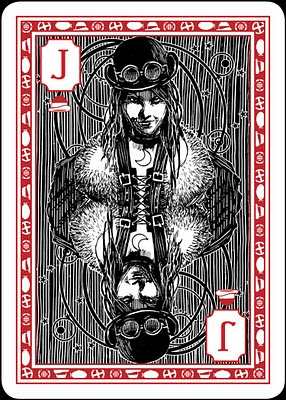 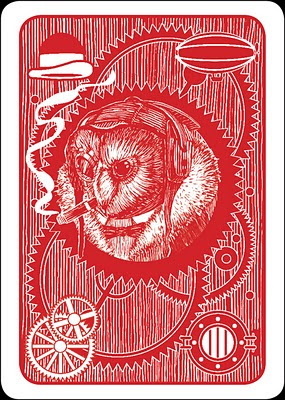 This is the back of the card deck design.
Posted by dugbuddy at 5:19 PM No comments: 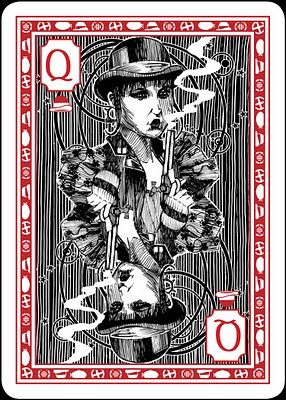 The House of Derbies:
The Queen of Derbies:
The Queen of the House of Derbies is one of determination and accomplishing whatever tasks that she believes important enough to be addressed. This Queen has an innate skill for filtering out what must be done from what others believe should be done. This ability starts to filter out into what some may call influence. Whether it is a tether to the other members of the House, or an influence of those seen as a threat to the House this remains yet to be fully explored.
Posted by dugbuddy at 10:10 AM No comments: 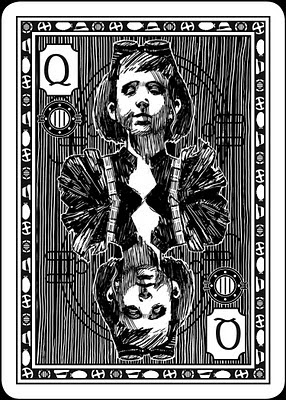 The House of Windows: The Queen of Windows
Posted by dugbuddy at 12:50 AM 2 comments: 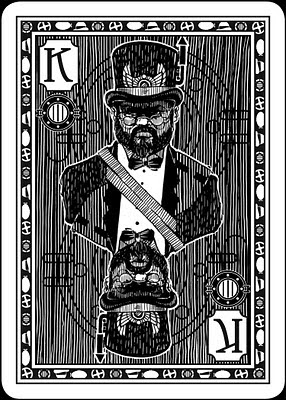 House of Windows:
The house of Windows deals with visions. Visions of the future tense, the present and the past all at the same time. Perceptions, possibilities, mysteries of what is, what was, and what might be are all kept and pursued by the House of Windows.
The King of Windows
The King of Windows is the mapper of possibilities. By passing though to see what has been and what might be, He observes, makes updates, and notations to the Paths of Existence. A history of the universe that is constructed in such a way that the Past and Future interlink in a construct of fantastic proportions to where it is almost... alive.
Posted by dugbuddy at 10:50 PM No comments:

House of Gears: the numbers 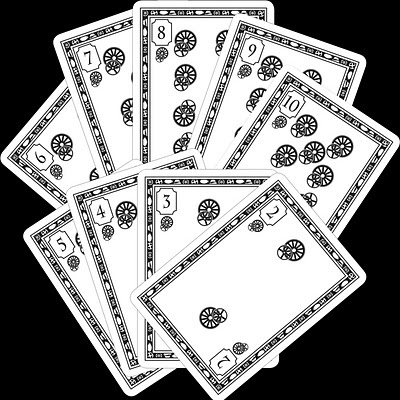 The House of Gears:
the numbers cards
Posted by dugbuddy at 10:15 PM No comments: 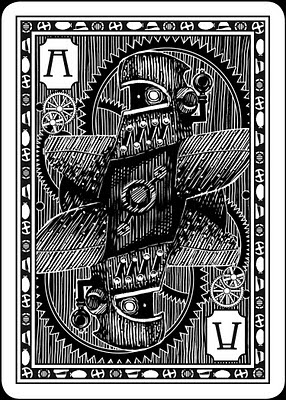 The House of Gears:

The Ace of Gears

The Ace of Gears is not a whom but a what. The Ace of Gears was forged from the mind and hands of the King of Gears long ago when the Houses numbered in dozens and the threat of siege was present at every turn. The Ace of Gears is the perfect protecting Knight that the House of Gears has ever produced. Its power is unrivaled; it protects the members of the Royal family as well as those of the entire House, even to the extent of sacrificing itself if necessary. It will never bend; it will never tire, never yield, and never surrender.

The Jack of Gears 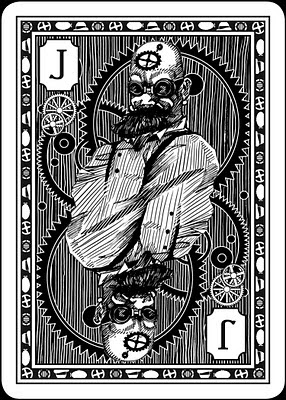 The Jack of Gears is a Jack in the truest of terms, relying upon his wits at least as much as upon his knowledge and attention to details to carve out his path. The Jack of Gears is perhaps the only member of the House of Gears to not only recognize chance but welcomes it and at times will embrace it over the known. This may be his way of stepping out from the shadow of the King and defining his own identity. At this time it does not appear to be as much a defection as much as the exploration of abilities and style.

The Queen of Gears 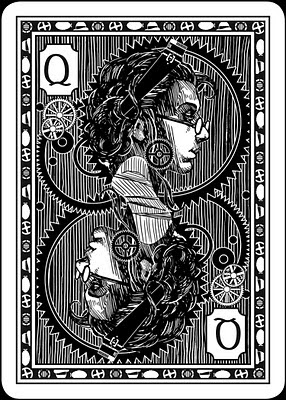 The House of Gears:

The Queen of Gears

Ever noble and steadfast at her true loves side, the Queen of Gears is a vision of honesty, of knowledge, valiance, and confidence. She knows who she is, as much as who she is not. She knows what she has the ability to change, and how far that ability can reach. The Queen of Gears, though ruling at her Kings side, is at no means a step down in power, in the eyes of the House of Gears, or any other House. She is Queen.

Posted by dugbuddy at 9:38 PM No comments:

The King of Gears 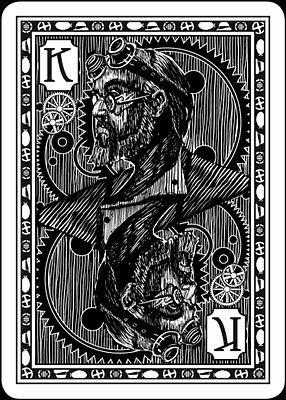 To keep myself busy in the lonely of the night, I have started a project of designing and illustrating a deck of cards. These will be a Steampunk deck of playing cards.

The House of Gears

The King of Gears

The master of the construct; whether it is through sculpture, or through schematic drawings. It is the thrill of the build, the unlocking of the world’s mysteries through the assembly of what his hands and mind can provide that have made him a wise and knowledgeable king. He rules through balance, law, order, and justice. There are those who say that he sees with his hands, that the elements of the build themselves can speak to him.