a couple of sketches from Crypticon KC 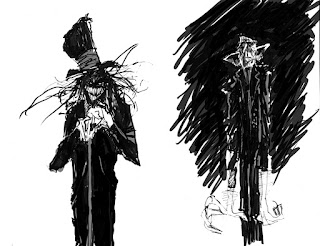 attended the first KC Crypticon... a horror convention. Very small and intimate, but folks were able to converse with a few hollywood horror actors... and one or two pro make-up people.  Have to say that sometimes the attendees were more interesting than the paid guests. I hope it grows, it was way too pricy for what was delivered, but it was the first year... and I got spoiled by Spectrum Art Live earlier in the year.  Perhaps just a different set of tastes.

Posted by dugbuddy at 9:43 PM No comments:

color version 1, the warms.
Posted by dugbuddy at 12:40 AM No comments:

Labels: Illustrations: the dark side., scratchboard

The black and white is complete for Black Aggie. Color will be applied asap. I like this one.  The Story of Black Aggie; guardian of the graveyard, Black Aggie is the embodiment of the lost daughter of a sculpter who, in his sorrow created a bronze monument for her memory. Over time, the statue became associated with the angel of grief. It also became rumored to be the protector of the cemetery, keeping it tidy and also protecting it from vandals. It is said that anyone who goes into the cemetery at night had best be on their best behavior lest they suffer the rathe of Black Aggie.
Posted by dugbuddy at 10:58 PM No comments: